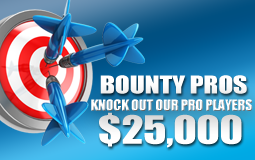 After taking a brief reprieve for the 2013 World Series of Poker, the Texas Holdem Bounty tournaments at Poker770 return as of Wednesday, July 17. This is a chance for players to compete against some of poker’s top pros online for only a $5.50 buy-in. What’s more, there’s an increasing bounty the better you do in the events and you can even win a sponsorship deal to be the next member of Poker770’s Team Pro770, worth $25,000.

The Poker770 Bounty Pro770 tournaments take place nightly at 8:00 pm and unlike the bounty tournaments at other sites, at this one you get a larger and larger bounty the more pros you knock out of the running.

In addition to the cash bounty and possible Poker770 sponsorship that you can win in the site’s nightly Bounty Pro770 tournaments, you’ll also get your names posted on the website next to the size of the bounty you won and the pro player you knocked out. 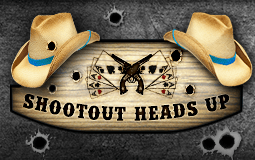 Poker770 has taken two popular poker variants and combined them into one with its new Shootout and Heads-Up tournament format.

As you may know, a shootout tournament is one in which the competition is eliminated one by one until only one player remains. In a heads-up tournament there are only two players to begin with. Well, in this novel combo of the two that Poker770 calls Shootout and Heads-Up tournaments, players compete in a multi-table tournament where each table has only two players. Every time one player is knocked out the remaining player is paired with the remaining player from one of the other tables. In this way, players duke it out head-to-head until only one player is left standing.

Shootout & Heads-Up tournaments are offered in both MTT (multi-table tournament) and SNG (Sit and Go tournament) formats with buy-ins ranging from $1 to $30 for the MTTs and from $1 to $200 for the SNGs. To find these Shootout & Heads-Up tournaments in the Poker770 lobby go first to Sit ‘n’ Go or Tournaments, as you prefer, then to “All” of the respective category (i.e. “all sit ‘n’ go). Then click the little magnifying glass icon at the upper portion of the screen and type into the search field “Shootout”. There you’ll see all shootout tournaments at which you can find the Heads-Up events by looking for the ones with the HU.

Other popular Poker770 offerings to look for include $50,000 in monthly freerolls, daily every hour, $25,000 monthly in Bounty Pro tournaments, and Speed Hold’em.

Each month Poker 770 holds a Free Festival 770 full of freeroll tournaments with a total of $50,000 worth of real money prize pools.

Players can also qualify for the next Mega Poker Series (MPS) when they play at any Free Festival $27.70 tourney and land in the top 10. Those players will each get a €2.20 entry into the the daily Mega 1 -1 ticket €21 GTD tourney. There is also a complete schedule of MPS satellites offered in cooperation with Carbon Poker.

And in addition to their Free Festival770 Freerolls and regular daily freerolls, Carbon Poker also offers two ongoing tournaments with tiny buy-ins, both Hyper SNGs. One has a $0.05 buy-in and the other has a $0.10 buy-in. Both have an additional $0.01 fee.

While most online poker sites have been struggling in terms of their tournament guarantees, one site has decided to step their game up a bit with a brand new $25k guaranteed event.  The event will give players from all limits the opportunity to play, as the buy-in is only $7.70 with an optional rebuy and add-on.  The event will kick off on October 28th at 21:00 CET at the online poker site Poker770.

While most guaranteed events will feature massive numbers of players, Poker770 has decided to cap the event at 3,000 players, and rebuys are limited to only 10 per player up until the first break in the action.  The add-on feature give players the opportunity to add additional chips just after the rebuy period ends.  What this means, is that this tournament could not cost any one player more than $100, and it offers an incredible $25k in guaranteed money.  This tournament is a great value to players, as the prize pool almost certainly won’t hit the guarantee.

To make this even better, players can win their way into the event without actually having to spend their own money, as there will also be freerolls ran daily, and satellites that cost only $0.77+$.07 to play in as well.  The freeroll events will guarantee 10 seats, and must have a minimum of ten players to begin.  As far as the cash buy-in satellites go, there will be one seat guaranteed, with a seat added for every ten players who buy-in.

The bounty events at Pro770 are just another great option for players as well.  These events feature a €5 buy-in, and have great prize pools, as well as the option for you to to knock out multiple pros and win prizes depending on how many you are able to KO.  Right off the bat if you knock out one pro, you’ll win $100, and the prizes increase from there.  If you are able to knock out a total of four pros in one single week, you’ll receive the grand prize from the site.  The first thing that you will win is a $50k grand prize, and also receive a one-year pro sponsorship deal from Poker770 to be a part of Team 770.