For the month of January 2014, Poker Stars is holding a Free $20+$14 offer. Just make you first deposit ever into a new Poker Stars account by January 31, 2014, and as long as your deposit is at least $20, you’ll get a $20 free bonus plus $1 per day for the next 14 days to apply toward any real money ring game or tournament, which you redeem by simply playing that day at any real money ring game or tournament. Just be sure to use the code FREE20+14 when making your qualifying deposit so you’ll be sure to get your full bonuses.

Playing anytime in January of 2014 also entitles you to participate in the January Challenge, a PokerStars promotion that awards $15,000 per day. You can win yourself a share of that daily award by opting in to the promotion with the Star Code CHALLENGE. Then complete the daily challenge and you’ll win a ticket into a Daily Challenge All-in Shootout, a tournament you need not be present to participate in, and which awards $1,000 to the first place winner. In an all-in shootout, all players are automatically placed all-in on every hand until there’s a winner. The more Daily Challenges you complete, the more rewards you can win. Challenges may include playing certain games online or on a mobile device, earning VIP Player Points in certain ways, or making minimum deposits. Complete 10 Daily Challenges and be entered into the Final Challenge All-in Shootout with $100K in added cash value and 10K added in PokerStars gifts. 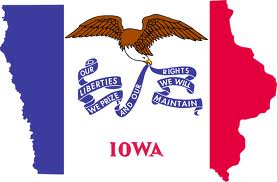 It is now (semi)-official: an online poker bill will not appear on any ballot presented to Iowa voters in 2014, though some hope lingers that such a move could happen as soon as 2015. This from an article released recently in Casino Enterprise Management, which reported on the declaration of Wes Ehrecke, the President and CEO of the IGA or Iowa Gaming Association, when he was interviewed as a guest on a panel for 2014 Gaming Predictions. For the coming year, Ehrecke said, the state’s focus will remain on land-based casino gaming operations.

Part of the problem with getting online poker on the table this session is purely logistical: the typical 100-day Iowa legislative session has been cut by two weeks this year. In the coming year, however, Iowa lawmakers will be watching closely what happens in Nevada, Delaware, and New Jersey, the three states where online poker and other forms of gambling have been legalized and launched for players residing within those states. If things go well in those pioneering online gambling states, it may bode well for Iowa’s online gambling prospects in 2015.

The general analysis of this predicament is that it represents the norm we can expect in the short term, as states considering iGaming (as the Internet gambling industry has now been dubbed) will sit tight for a while and see how things play out in these other states before taking any action in their own. So while Nevada, Delaware, and New Jersey have helped nationwide iGaming in the long run, some short term collateral danger seems clear and present.

With the next Super Bowl almost upon us, Bovada Poker is celebrating with a special themed promotion for its sports-loving fans. It’s called Eyes on the Prize and it promises to award weekly bonuses plus a shot at one of four large screen televisions.

Just play at Bovada Poker’s real money tables and tournaments between January 6 and February 2, and all the Poker Points you earn during this time will count toward a bonus award and entry into a special drawing for the grand prizes.

It starts by opting in to the promotion using the red Enter Now button which can be found on the Eyes on the Prize promotion’s page on the Bovada Poker website. Then get playing.

At the end of each week, get a $10 cash bonus if you’ve earned at least 75 poker points, a $20 cash bonus for at least 150 points, and a $30 cash bonus for earning at least 200 points that week. Over the four weeks of the promotional period, that makes for up to $120 in possible cash bonuses you can earn in all.
Then, you’ll also get entries into that week’s drawing for a 52” TV or your choice of a $1,000 cash alternative. Get 1 entry for earning 75 points in a week, 2 entries for 150 points, and 3 entries for 200 points. From there, you’ll earn an additional entry in the weekly drawing for every 50 poker points you earn above the first 200 points that week.

Win a share of $50,000 in prizes in 888 Poker’s The Big Bang promotion, which started on January 6 to and awards a variety of great prizes, including the latest models of the most popular video game consoles and more.

To win your share of this prize booty, play cash games at 888 Poker and earn points on a leaderboard. You earn points from the first 150 hands of each day. To earn points either win a hand after the flop or get to the showdown of the hand. The amount of points you earn each time you qualify depends on the ranking of your hand at the time.

888 Poker is hosting 3 leaderboards for each country or region represented by the following 6 categories: Russia, Canada, UK, Australia, Germany, and International (for all other countries).

As the new year gets underway, Party Poker has several satellite tournament series’ running for various stops on the World Poker Tour, including the WPT Fallsview Poker Classic, the WPT National UK, and the WPT Borgata Winter Poker Festival.

Full qualifier schedules are running now at Party Poker that include freeroll entry options giving players the chance to win these packages for absolutely nothing except solid poker playing. There are $1 sub qualifier speed events, rebuy events, and more ways to climb that satellite ladder and win a seat in one or more live World Poker Tour events. 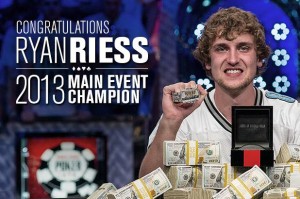 In our final installment of this three-part look back over the year that was, we round out the top poker stories of 2013 with these quick bites (in no particular order)

The launching of legal online poker in Nevada and New Jersey only scratched the surface of the poker news of 2013, one of the other biggest stories of the year being the beginning of Full Tilt Poker’s repayment of U.S. player funds seized back in April of 2011 when the U.S. Department of Justice shut down Full Tilt Poker, among several other online poker sites. Those other sites had already long-since remitted player funds unable to be withdrawn after the seizure, but Full Tilt Poker had yet to catch up. Now it looks like the remission process is underway and players can start to look for the return of their long held-up funds sometimes around March or April of 2014.

Meanwhile, Party Poker hasn’t been available to U.S players for a lot longer than the sites closed down on Black Friday, April 15, 2011. Party Poker closed its own doors to U.S. players 7 years ago. But now its back, in New Jersey at least, in the form of two real money online poker rooms opened with this year’s legal intrastate poker launch in the state, in league with the Borgata, for half the N.J. online poker market share already. 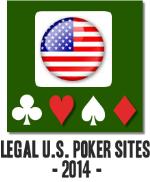 As we get ready to ring in the New Year, it’s a good time to take a moment and look back over the year that was. A lot happened in the world of poker, online and off, in 2013. So much poker news that it’s taking us three posts to review it all.

Of course of greatest interest to the readers of this blog, no doubt, are the strides made this year in legal U.S. online poker. Three states  – Nevada, Delaware, and New Jersey – launched their real money online poker games to their residents.

Nevada was first to pass legal intrastate online poker, back in 2011, and the first to implement it, in April, when its first real money online poker site, Ultimate Poker, went live. Later in the year, in September, Caesar’s opened WSOP.com, a site branded after the World Series of Poker.

This was followed by Delaware’s launch of its legal real money online poker offerings for residents of that state. And while its a much smaller market than either Nevada’s which preceded it or New Jersey’s which followed it, it’s one more state on board with online poker legalization, and that’s no small reward, especially to the players living in that state.

What states will we see pass legal intrastate online poker legislation in the coming year? 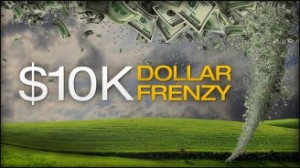 In celebration of the 2014 New Year, Carbon Poker, on Sunday, January 26, 2014, will be holding a $10,000 value added tournament called the $10K Dollar Frenzy. For this special tournament event, Carbon Poker is adding $10,000 to the prize pool created by players’ buy-ins, which means the actual prize pool will be significantly higher.

It’s called the Dollar Frenzy because the buy-ins is only $1 and there is no fee. Further, that $1 buy-in can be paid in the form of cash, and entry coupon, or VIP Points. The entire buy-in for this event will go into the prize pool. The event starts at 16:00 Server Time.

You can even get in on the Carbon Poker $10K Dollar Frenzy for free by winning your seat at one fo the daily $10,000 Dollar Frenzy Freeroll tournaments. They take place at 19:00 Server Time daily and at each event, 25 seats in the $10K Dollar Frenzy will be awarded. Registration for this event opens 30 minutes before freeroll start time, and only 250 players will be permitted to register.

What’s more, also in celebration of the 2014 New Year, in addition to Carbon Poker’s regular weekly Sunday Big Ticket $100K Guaranteed and Sunday Big $11 – $10,000 Guaranteed events, on Sunday, January 26, 2014 the site will be  adding two more tournaments to the schedule with the same guaranteed cash prize pools. In preparation for these events, Carbon Poker will be holding, on Saturday, January 25, 2014, two Sunday Big Ticket Qualifier tournaments.

The qualifier series for the 2014 Aussie Millions is now officially underway at Poker Stars, offering players 8 guaranteed free seats in the Aussie Millions Main Event tournament plus over $10,000 in added value in the form of tickets into series events. Specifically, in addition to those 8 guaranteed main event seats Poker Stars will be giving away in this series a total of $10,464 in free tickets. Here’s how to get yourself one or two of those.

To register for any of these events, just go to your PokerStars lobby and find Events under APPT.