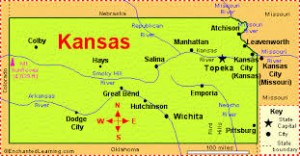 The effort to legalize online poker intrastate in Kansas has won another small victory as a recent gambling expansion bill that included a stipulation banning online poker and other online gambling bill within the state has official died in a final state Senate vote of 24 – 15.

The victory was small, and a close call, however, as in a previous vote on just amendment demanding the online gambling ban itself passed with a more than 2 to 1 vote of 26 – 11. That means it’s not very likely that the online ban played a role in the overall bill failing to get a passing vote, rather that the primary focus of the bill, to attract an additional land-based casino to the state to set up shop in an unoccupied zone in the SE corner of the state where in-person gambling is permitted, was unpopular. Interestingly, that corner of the state is the only one of the four authorized gambling zones within the state not to have attracted a new land-based casino to set up shop there yet, no doubt in part because the area is so sparsely populated.

If the bill had passed, the amendment with the online gambling ban would have prevented all electronic video games and slots from the state’s brick and mortar gambling facilities before 2032. And it would have made online poker and other forms of online gambling a Class B, non-person misdemeanor, the penalty for which could be up to a $1,000 fine and 6 months in jail.

PokerStars has always been one of the most popular online poker sites out there, and this especially includes among United States players as well.  It seems that since Black Friday, many US based players have continued to attempt to find ways to play at the massive site, even though it shut out the United States completely.  Some players moved out of country in order to continue their poker careers, but most players who don’t play for a living could not move out of the country to continue playing poker; so they had to turn to other routes.  This is where the Virtual Private Networks (VPN) came in.

Unfortunately for US players, the VPN’s may have worked for a while, but PokerStars has began to crack down on this, and have frozen the accounts of many US poker players who have been using the private networks.  The players would receive notices stating that their account was suspended “pending further legal review”.

Players can not log in to PokerStars from inside the US borders to play for real money, but with these new connections, their internet connections are then rerouted through different servers that are hosted from outside of the United States.  Essentially, it is like tricking the system into saying that the player is actually in a country that allows online poker player, and saying that their IP address is not from the United States.

The main way that these connections have been detected by PokerStars, is that once a player gets disconnected from the VPN, you can see their actual location.  And of course PokerStars is one of the most in-depth and largest online poker sites out there, so you can bet that they have tracked this quite a bit.

It will be interesting to see what PokerStars decides to do about the players who have been using these Virtual Private Networks.  You can assume that they will almost definitely be taking action against the accounts that have been using them.  Part of this reason is due to the fact that PokerStars has been huge in following the Department of Justice’s online poker rules since Black Friday.