Jonathan Duhamel has been on one heck of a ride since the home invasion and robbery that occurred back in December of 2011, but one of his most prized possessions that was missing has now been returned to its rightful owner.  This is none other than the World Series of Poker Main Event bracelet that he took down back in 2010.  He was bent on trying to get this bracelet back, as it was one of the things that meant the most to him out of what was taken.  It was gone for around two months, but this past Wednesday it was found, but not quite in the same condition that he lost it in.

It was found by a street sweeper named Denis Theriault, who cleaning up the Ville-Marie tunnel, when he found the bracelet while emptying the sweeper out.  It was completely beaten up, and looked as though someone had just taken a hammer to it.  It was worse than that though, as it had actually been run over by a car unfortunately.  The bracelet has (had) a diamond mix in it as well, and no one is positive about how it ended up in this tunnel, but there are a few assumptions.  One of the most popular ones is that whoever had  the bracelet at the time decided that there was no way they could sell the bracelet without being caught, so they simply threw it into the tunnel.

The bracelet essentially has lost everything except for it’s main plate, but fortunately Seth Palansky, who is the Media Director of the World Series of Poker, told tournament director Mitch Garber to let Duhamel know that they would work with him to replace the bracelet.  The current bracelet has Duhamel’s last name scratched off, but his first name, the date of the event, and the name of the tournament are all engraved, so there was no way that someone would not be able to realize that this bracelet belonged to Duhamel.

Duhamel has been one of the hottest players to start 2012, and it looks like he’s rebounded well from the home invasion as well.  Keep an eye on him throughout the year as he could be in for another huge year.
Last Updated on January 2, 2012 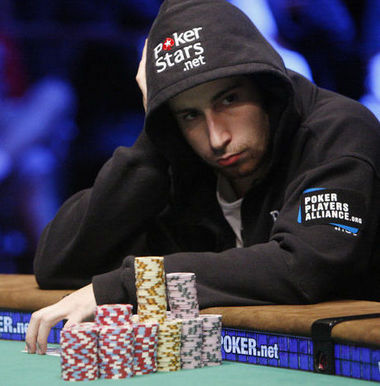 Last week there was an interesting story released about the home invasion and robbery of a winner of one of the largest online poker tournaments out there, the 2012 World Series of Poker Main Event.  The report said that two men rang the doorbell of Duhamel’s home in Montreal, Quebec at about 9:15am on the 21st, and the men forced their way into his house and beat the man.  They also stole his WSOP gold bracelet, an engraved rolex, and quite a bit of money.

Four people have been arrested for the incident now though for the crime.  It was three men and one woman who were involved, and the first arrest came on the 24th of December, which was a 20 year old woman that was charged with conspiracy.  After that two men, ages 22 and 26, were arrested for attacking Duhamel, and they were charged with breaking and entering, forcible confinement, assault, and possession of stolen goods.  The fourth and final arrest came on the 29th, and it was a 20 year old male.

The arraignment came on the 28th for three of the four suspects at the Longueuil Courthouse.  The Rolex that was stolen from Duhamel was recovered, but his World Series of Poker gold bracelet is still MIA, which has led to Duhamel offering a reward of $10,000 for any information about the thieves and the recovery of the items that were taken from him.

After the incident Duhamel dialed 911 and was taken directly to to the hospital.  After the incident occurred, he released a statement saying that he “spent the night at the hospital and was black and blue all over but had no broken bones, no blood clots, and nothing to worry about.”  He also went on to state that he was exhausted but happy to be alive.

It’s definitely good to see that the four people involved in this situation were arrested, and it helps raise the awareness of how careful poker players need to be in general, and that especially includes if they are able to take down big prizes like the $8.9 million grand prize that Duhamel took down at the World Series!

In some shocking news, a former World Series of Poker Main Event winner is in the middle of an alleged assault on Wednesday morning.  Jonathan Duhamel is one of the best up and coming young stars in the poker world, and is best known for winning the 2010 WSOP Main Event, and taking home the $8.9 million grand prize for it.  On top of the alleged assault, his home was also the target in a home invasion as well.  No one has made statements about it except for Duhamel’s agent, Phillipe Jette, who made a few remarks that help prove the truth in this story.

Jette said that Duhamel was injured during the incident, and made statements like that his “Christmas photos won’t be the prettiest”, and also that “getting out of bed will be particularly hard tomorrow”.

There hasn’t bee anyone specifically named  in this assault yet, but the story is that two men went to a house on Wednesday morning at 9:15am in Boucherville.  The two men then rang the door bell and this led to them assaulting the man who opened the door.  It was an armed assault, and no one has stated if there was anything taken from the house by the two men who were involved.

Duhamel has had quite a bit of success in the poker world, which obviously all starts with his $8.9 million payday.  After winning the Main Event, he went on to travel around the world and play in many different poker tournaments.  He won over $600k on his trip, and is also a part of Team PokerStars Pro roster as well.

You never want to hear a story about any type of assault, but this is not the first time that a poker player has been in the midst of a situation like this.  Doyle Brunson wrote about his run in with a home invasion and assault, and Greg Raymer was also once nearly robbed at the Bellagio as well.  Obviously before any final conclusions are made, we’ll have to see what exactly happened, but this is a story that is definitely worth keeping your eye on.