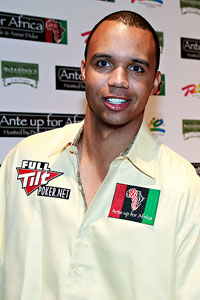 Just a year and a half ago, Phil Ivey was sitting at the final table of the World Series of Poker, one of the esteemed November Nine. This year, he’ll be sitting out the event entirely, in protest to what he sees as Full Tilt Poker’s unfair treatment of its American-based players. On top of all that, he’s suing his former sponsor, Full Tilt Poker for what could amount to $150 million in damages.

When Black Friday first occured, Phil Ivey came out asking players to have patience with the site as it worked out how to get its American players (now former-players) the money back from their Full Tilt Poker real money accounts. But since that missive, Phil Ivey’s own patience has run out. He now says Full Tilt’s actions have “embarrassed” him.

He says the reason he won’t be playing in the WSOP is because he finds it unfair that many other players who might otherwise be there too cannot be because the money they would have spent on travel and buy-in costs is locked up in Full Tilt Poker’s bank accounts.

Full Tilt Poker, meanwhile, is holding no punches either, calling Phil Ivey’s lawsuit against them “sanctimonious” since he stands to gain $150 million off of his fellow players’ misfortune, suing the site for the full amount that it owes all it’s other American former-players combined.

The reaction to Ivey’s actions in the poker playing community is decidedly mixed.