PokerStars is well-known for their constantly running top notch cash games, and their massive online poker tournaments as well.  This one sets the bar to a new standard though, as their 10th Anniversary Sunday Million tournament offered players a $10 million guarantee.  On top of that, there was also a $2 million payday for the first place winner of the event as well.  Even more exciting about this huge opportunity for players though, is that the buy-in for the Sunday Million is only $215.  PokerStars was in a tough spot here, because in order to hit the guaranteed prize pool of $10 million, they would need to have over 46,000 entrants into the event, which would be unheard of.

This is why it was a shocker when the prize pool ended up being $12,423,200, which is well past the guarantee.  This meant that Pokerstars didn’t have to put any additional money into the tournament, and also that there was an insane amount of players playing in this.  To be exact, there was 62,116 players when all was said and done.  The prize pool of over $12.4 million topped the old record of $12,215,000 that was set during the WCOOP Main Event as well.  And for those of you who are curious what the number to make the money was; well, the top 7,000 players got into the cash of this one.

As you might imagine from a pool this huge, the final table didn’t have the big named players, but it did have a pretty excellent score for one player.  The winner of the event was a Canadian player named Kyle “First-Eagle” Weir, who is actually unemployed, and his old biggest cash was a $4k win.  The final six players in the event decided to do a six way chop, which gave everyone at least $580k.  In an interesting situation, the second place finisher, “unstoffable” actually took home the least amount of money out of everyone, while the fifth place finisher got a payday of almost $1 million because of this chop.

The following is the final table, with the top six players taking part in the six way deal: 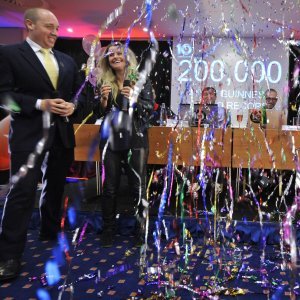 Poker Stars has succeeded in once again holding the biggest online poker tournament, based on the number of players registered. There were 200,000 in all, this time, and there would have been more if technical issues hadn’t capped the potential pool at 200,000, the target number to set a new record, according to Ondrej Drebota, Manager of the Czech Republic PokerStars.com. The previous record was set by Poker Stars as well, on December 2009, for 149,196 players.

The ceremony celebrating this latest world record was held at the site of the EPT Prague, which is taking place now. Poker Stars’ WCOOP Radio broadcast the tournament live, which took place at the same time as the world record ceremony, Sunday the 4th of December, 2011.

When the 200,000 player tournament started, it crashed the PokerStars servers, causing all the other tournaments taking place at the site at that time to be held up for 20 minutes.

This event also marked the start of the 10th Anniversary festivities taking place at PokerStars throughout the rest of the year. It features ten promotions in all, eight of which have already been detailed earlier in these pages. The last two 10th Anniversary promotions – special cash prizes for the Battle of the Planets Sit ‘n’ Gos and a 72 Billionth Hand bonus – will be featured tomorrow.

PokerStars is not only the largest online poker site online, but is also the only one of the three online poker sites to overcome Black Friday and continue to bring in impressive results.  The online poker site also held the record for the largest online poker tournament in history, and just this month they decided to attempt to break their own world record once again.  The site placed a cap on the tournament, which featured a $1 buy-in and $250k in the guaranteed prize pool.  The numbers were so high that they brought in an incredible 200,000 players, which is even more amazing considering the fact that they were in the United States market when they originally broke the record.

As if the 200k players wasn’t impressive enough, take into consideration that this number was hit more than three hours before the tournament actually began.  Based on the old numbers, if PokerStars was still in the US market, there is a very realistic chance that this number could have hit 300k in total players, which would have been absurd.

The old record that PokerStars set was 149,196 players, and was set around two years ago, back on December 27, 2009.  It was seen that this number was actually passed in the pre-registration period, many days before the tournament even began.  It’s not much of a surprise that the players were eliminated incredibly fast from this tournament, as many players went for the “go all-in and either double up, or go home” method, since it was only a $1 tournament.  This meant that the players were in the cash only 2 and a half hours into the event.  This meant there was 12,150 players left, and the first payouts were $4.  The first place prize was set at $50k, but the players had a bit of work to do in order to outlast 12k more players.

While it was a nice feeling for everyone who made the money to get into it so quickly, they weren’t nearly as fortunate when it came down to finding an eventual winner.  It took five additional hours for a champion to be found, and a deal was actually made over three handed play as well.  The deal gave the first place winner $40,258.83, and he played by the name of sokoluk1991.  Second place went to Kaitz20, and this player took down $34k for their efforts.  Third place was a player who played under the name King-2-Z, and they took home $25,741.17.  Not a bad deal for just a $1 investment eh?