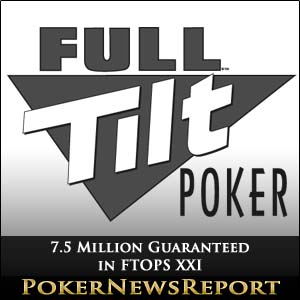 This month, on Tuesday, November 6, 2012, while the U.S. reelected a president, the rest of the world got one of their favorite poker sites back. On that date, after 495 days off the scene, Full Tilt Poker returned. The formerly beleagured top poker site saved from oblivion by Poker Stars reopened its doors, accepting new players from (almost) everywhere (except France, Italy, Spain, Denmark, Belgium and–most notably–the United States) and welcoming back players who still had an active Full Tilt Poker account (except from the United States) when Full Tilt Poker closed over a year ago.

The relaunch of Full Tilt Poker was greeted by the return of 400,000 of its previous players, with an average of 8,500 cash games taking place daily now at the site, at stakes of up to $400/$800. This also means former players at the site can log into their accounts to withdraw any funds they had locked up in that account as well. The site says it has $186 million to be returned to non-US players.

Aiming at the casual, recreational player more than the hard core professional (or amateur) trying to make a living (or a killing) online, the new Full Tilt Poker offers lower VIP rewards through its new Edge program than, say, Poker Stars’ VIP scheme, although FTP’s is currently offering a restricted 10-25% rakeback deal. PokerStars, incidentally, also doesn’t accept players from U.S.. Returning former Full Tilt Poker players may find that they haven’t been placed in the lowest, starter tier in the Edge program but rather, based on their play and certain promotions from prior to June 2011, they have been placed automatically into a higher VIP tier.