British online poker players who had funds tied up in Full Tilt Poker’s accounts when the site was closed down and its assets seized were told in an official statement released by the Alderney Gambling Control Commission that if they feel they’ve been the victim of any crime and / or if they think Full Tilt Poker still owes them money that is rightfully theirs, then they should file a report with their local police department.

Full Tilt Poker was closed as part of the events of Black Friday, April 15, 2011, when fellow sites Poker Stars and Absolute Poker were raided as well. Since that time, the AGCC has revoked Full Tilt Poker’s license and the site, at last count, owes dislodged players from the U.S., U.K. and Canada around $150,000,000. Poker Stars is the only one of the three sites closed on Black Friday that has paid back is dislodged players and reopened in its legal markets with its reputation intact. Not so for Full Tilt Poker or Absolute Poker, both of which are the subjects of numerous class action and civil lawsuits.

The AGCC has also advised Full Tilt Poker’s former players residing in Britain to take one of two other actions besides calling the police if they feel so compelled, those being to join or start a civil action against Full Tilt Poker or wait for Full Tilt to make good on its promise of releasing contact information for someone specific whom concerned players can contact. 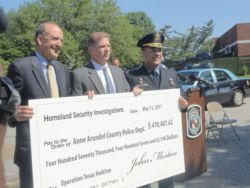 A local police department in Maryland is celebrating after participating in a federal sting operation which shut down major internet gambling operations. The Anne Arundel Police Department received a check for $470,000 after helping the feds seize online gaming companies that processed over $33 million dollars’ worth of transactions through the undercover processor. The money comes from a case handled by federal investigators in Baltimore and the operation was suitably named “Operation Texas Hold’em.”

William Winter, the agent in charge of the Department of Homeland Security in Baltimore, made a statement earlier regarding the seizure and explained how the feds set up a phony processing company and allowed the undercover agents contact with the online gaming operators. It’s illegal in the United States of America for companies to accept and/or process gaming transactions; which gave the feds ample reason to go undercover.

Through the sting operation the federal agents negotiated contracts with online gaming operators and began processing funds for the companies. The agents could easily track the payments to numerous operations and bank accounts in the United States and abroad. The accounts were seized in the recent bust and the monies were shared among the agencies that participated in the sting. The amount given to the Anne Arundel Police Department was based on the number of agents from the force that helped take down the online gaming operators.

“This is huge, especially in these economic times; we just went through a very tough budget where we’re getting vehicles taken away. This infuses money to be able [to buy] vehicles, weapons that are less lethal and to do training that is much needed for these officers to do their job.”

Some industry insiders believe this is just the beginning. It’s obvious that the government in the USA is serious about taking down online poker and this is proof. Time will tell how many operators will shift and take their business out of the USA, and as of now the bigger names in online poker have already done so. Poker players in the United States can still play online at selected sites, but with operations like these going on who knows what is in store for online poker sites in the near future.

For those of you who had your Quicktender – UseMyWallet Funds seized. This is the case that led to those funds being seized. 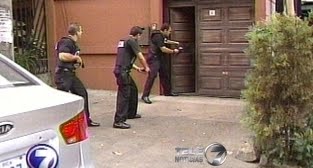 According to our sources in Costa Rica and several web reports from @KevMath and  @TaoPauly we’ve learned that the Costa Rican offices of Pokerstars, Absolute Poker and UB were raided earlier today by the OIJ, which is similar to the FBI in the U.S.. Police also raided several homes that are linked to the owners of Absolute Poker and UB.

Pokerstars VIP Manager Steve posted this on 2+2 a couple of hours ago,  “PokerStars continues to operate the world’s largest poker room, business as usual. It is true that the OIJ is currently at the PokerStars Costa Rican office and has sent employees home temporarily, but employees will be able to return in a few hours. PokerStars expects the office to return to business as usual in short order as this action was most likely taken as a response to problems experienced by other local companies in the same industry.” He’s of course referring to Absolute Poker and UB. Police left the Pokerstars offices shortly after arriving. Pokerstars is based on the Isle of Man and only have a small support staff in Costa Rica

We’ll stay on top of this story and continue to bring you the latest.