The Black Diamond Poker Open has returned to Bovada Poker, launching today, Monday, February 4, 2013 and running through March 24, 2013. It’s made up of 86 different events worth a total $850,000 guaranteed prize pool.

Action is available in this contest for low limit and high limit players alike, as well as players who prefer Stud or Omaha in addition to their usual No Limit Hold’em.

Players can buy-in directly to any BDPO event or they can win their seat in these events through over 2,000 satellites and qualifiers running now at Bovada Poker. Qualifier freerolls award seats in $1 + $0.10 satellites which in turn award seats in the BDPO itself.

There are also Super Saturday Satellite Tournaments scheduled on the Saturday before each series’ main event which awards a whole bunch of seats in their corresponding event as well. 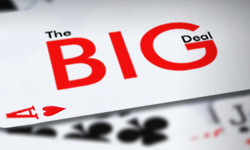 Bovada Poker runs several tournament series with big money prize pools, not least being the $100K guaranteed event that takes place every Sunday afternoon at the site at 4:00 pm ET. Best of all, qualifiers into this event start at only $1 to enter.

The qualifying schedule for the weekly $100k GTD starts with cheap seats for just a $1 + $0 buy-in. For every $17 collected in the prize pool at each of these events, 1 player will advance to one of the $100k Semi Final events of the player’s choice. These take place three times a day, Mondays through Sundays.

There are also special 30-seat and 50-seat qualifiers, both with $18 + $1.80 buy-ins, each awarding to that many top players seats in the $100k guaranteed main event. Players can also enter the 50 seat special qualifier with Bovada Poker points by using the PTS to TT converter tool the site provides. In that case, the buy-in would be 1,750 points.

One of Bovada Poker’s most popular ongoing promotions is its King of the Felt competition for Sit and Go tournament players.

Finish in first or second place in at least 3 Bovada Poker Sit and Go tournaments within a single week and you’ve got a shot at a $2,500 in weekly freerolls and a weekly heads-up tournament with a prize of $1,000. Meet the preliminary requirement of 3 win or place finishes in Bovada Poker sit and gos and earn a ticket in a drawing. Win or place in more than 3 sit and gos at the site and earn additional tickets as follows:

• win or place in 6-8 SNGs and earn 2 entries and a seat in the weekly $1,500 King of the Felt freeroll tournament 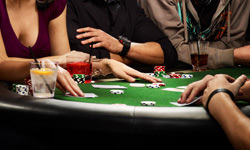 This week is the final week of the NFL Poker Pass at Bovada Poker: the last week of $5K freerolls and the last chance to win tickes in the 2013 Super Bowl XLVII.

To participate, opt-in to the promotion first by clicking the red Enter Now button on the promotion’s page on the Bovada Poker site. Then bet $25 this week on any NFL game and automatically receive a ticket in the next (and in this case, the last) $2,500 freeroll of this promotion; bet at least $50 on any NFL game this week and automatically receive a ticket into the next and final $5,000 freeroll.

Monday, November 5, 2012 is the last day to place your bets in the current Bovda Poker NFL Poker Pass promotion.

The winner of each $2,500 freeroll and the winner and runner-up of each $5,000 freeroll will be invited to play in the NFL Poker Pass Finale tournament where the Super Bowl XLVII grand prize package will be given away. Players can only earn 1 ticket into this event.

Win the Super Bowl XLVII grand prize package, valued at $15,000, and receive 2 tickets to the 2013 Super Bowl, taking place at the New Orleans Superdome, with free flights and accommodations for 2 and $1,000 in expense cash. If the winner chooses not to accept this prize package, a cash equivalent will be awarded.

The last two weekly freerolls of this promotion take place at 8:10 pm ET on Wednesday, November 7. (Which means there’s still time to gain entry into the second-to-last events this Wednesday, October 31st as well.) The Bovada Poker NFL Poker Pass Finale will take place at the same time on Sunday, November 11.

Bovada Poker has just launched a new promotion called Mission Sit ‘n’ Go, awarding seats in a private $2,000 GTD tournament and as much as $120 in individual bonuses.

Complete either or both missions as often as you like: the more the better for you, as each completion earns you entry into one of two drawings for the prize of a private $2K guaranteed tournament. As a private tournament you will be able to invite up to eight other players of your choosing to sit in with you for that prize pool.

What’s more, there are also individual bonuses available to players for earning a requisite number of poker points during the promotion:

If you love poker and you love football, then Bovada Poker has the promotion for you. It’s called the NFL Poker Pass and it’s your ticket to this season’s Super Bowl XLVII.

These weekly freerolls, of which you can earn entry into one per week (the higher paying one for which you qualify) all take place on Wednesdays, with tickets into the events awarded to qualifying players each Tuesday prior.

In addition to their guaranteed cash prize pools, first place in each $2,500 freeroll will win a seat in the NFL Poker Pass Finale at which the grand prize will be awarded, while first and second place both in the $5,000 freerolls will win seats in the event. The Grand Finale happens Sunday the 11th of November, 2012 at 8:10 pm.

Super Bowl XLVII will be hosted in New Orleans at the Superdome. 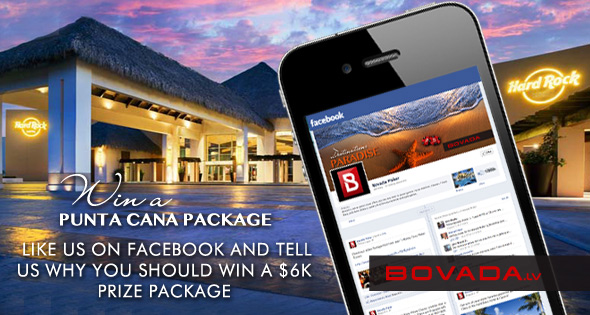 Along with all the other ways you can win tickets to this year’s upcoming Punta Cana Poker Classic at Bovada Poker, there’s now a way to win a $6K prize package to the event with your Facebook account.

Now if you “Like” Bovada Poker on Facebook and make a video explaining why, you could be the one lucky player chosen to win a $6,000 prize package to the Dominican Republic to represent Team Bovada at the Hard Rock Hotel and Casino in the Punta Cana Poker Classic.

Unlike points races, rake races or satellite qualifier tournaments, in this promotion the video’s the thing. Come up with the funniest, wildest, most exciting video expressing why you Like Bovada Poker so much and you could be the one chosen to win the $6,000 prize package to play in the Punta Cana Poker Classic.

The prize will only be awarded if Bovada Poker receives at least 40 entries into the competition, so it pays to enter. Plus, the first 10 entries will win a $7 + $0.70 Punta Cana qualifier ticket at Bovada.lv.

The deadline to submit your video is Wednesday, September 12 at midnight; the winner will be announced at September 14. Sign up at Bovada Poker by clicking here.

Bovada Poker has just announced a new online poker tournament series that it’s calling the Mini Poker Series. It runs from June 24th through July 15th with a big finale event scheduled for July 19th, and promises 2 events daily with over $100,000 in guaranteed prizes including top prizes of a seat in the 2013 WSOP Main Event.

The player to win the July 19th finale receives the 2013 WSOP Main Event prize package valued at $12,000. For 2nd and 3rd, Bovada Poker is giving away prize packages valued at $3,500 a piece for the second Black Diamond Poker Open (or BDPO II). And all players finishing 4th to 9th get a ticket to the $100,000 Guaranteed tournament at Bovada Poker valued at $162.

The series starts on June 24th with a $5k GTD kickoff event. From there, each day’s schedule features one regular event and one turbo event. Tournament types vary from event to event, including shootouts and heads-up events. Preceding the Finale is the $20,000 Guaranteed Main Event taking place on Sunday, July 15th.

If there’s one game associated with the World Series of Poker it’s poker, of course. But that’s not stopping Bovada Poker from adding a little Blackjack action to this year’s WSOP mix.

The Bovada Poker Blackjack WSOP is a promotion that combines the best of two games: blackjack and poker. Specifically, you play one to win free entry into the other: that is, you play blackjack online at Bovada Poker for a chance to win a seat at this year’s World Series of Poker 2012 main event in Las Vegas.

To participate, just play in 21 hands of blackjack at Bovada Poker between June 1 and 21, 2012. This will grant you entry into a Private Blackjack Main Event Freeroll, an exclusive event with no other form of entry and one grand prize of a $12,000 WSOP main event prize package. Runners-up win prizes worth another $5,500-plus.

The grand prize package, worth $12,000, includes the $10k buy-in for the WSOP main event, $2k to spend on travel and accommodations, luxury player suite access, and an invitation to an exclusive party.

To qualify, the minimum bet on each of the 21 hands of blackjack you play to earn your freeroll entry is $5. Only blackjack hands played through the Bovada Poker software count for this contest; blackjack played in the Bovada Casino download casino or instant casino do not qualify.

Players at Bovada Poker can now aim to win a Vegas VIP Experience worth $5,000. The promotion takes place between May 28 and June 24 and Bovada Poker promises at its end to award two $5k prize packages to Vegas.

Each $5k Vegas VIP trip package comes with 1st-class airfare round trip to Vegas for 2; limo transport to and from the airport; a two-night stay in a specialty suite in a luxury hotel; an invitation to a VIP party and more.

Bovada Poker is offering players several different ways to win one of these prize packages…or several ways to earn chances to win, that is. The prizes will be awarded in a special drawing and you can earn tickets to that drawing in 3 different ways:
• Play poker at Bovada Poker and earn 1 ticket in the drawing for every day you play;
• Refer a friend to Bovada Poker and earn 10 drawing tickets for you and 10 more for your friend;
• Play in Bovada Poker’s Main Event qualifiers and satellites and earn 1 drawing ticket for every event played where the buy-in was at least $5 + $0.50.

Tune in here tomorrow to learn about yet another element of this Bovada Poker Vegas VIP Experience promotion: how to win $10,000 in weekly freeroll entries.