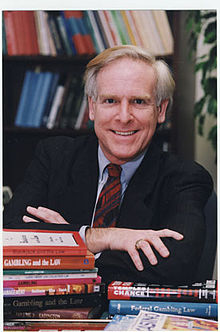 In a previous blog, I wrote that the timing was suspicious.  Why did the federal Department of Justice (“DoJ”) make its big show on Friday, April 15, 2011, when the grand jury had been meeting for more than a year?

We might not know the reasons for the timing.  But we can understand why the prosecutors structured their cases as they did.

I often act as a consultant and expert witness for governments and industry.  But I am also a professor of law, teaching not only Gaming Law, but also Criminal Law.  So, here’s my view of why the DoJ’s indictment reads the way it does.

The UIGEA was used because it covers money transfers, and to reinforce the false message that it made Internet gambling illegal.  The UIGEA is actually only an enforcement act.  It requires there be a violation of some other federal or state anti-gambling law.

The UIGEA was rushed through Congress by then-Majority Leader Bill Frist (R.-TN) and is a mess, with typos and other problems.  For example, the UIGEA is expressly limited to payments going from players to operators for illegal online gambling, not the other way around.  Do all the bank accounts that were seized only contain money being sent by players in New York to the poker sites?  Was none of it money won by players?

Conspiracy is often called the prosecutor’s friend.  All you need to prove is an agreement and an act in furtherance of the conspiracy.  You don’t need to show any other crime was actually committed or even attempted.  Conspiracy also makes trials easier for prosecutors.  For example, testimony by a cooperating witness, “He told me he was going to take poker bets from the U.S.,” would normally not be allowed in as evidence under the hearsay rule.  But, “He asked me if I wanted to help him set up a site to take poker bets from the U.S., and I agreed” comes in, to prove there was an agreement.

Almost all of the DoJ’s legal claims depend on the underlying activity, online poker, being illegal.  The problem for prosecutors is that the main federal anti-gambling statue, the Wire Act, has been held in a published federal Court of Appeals decision to be limited to bets on sports events and races.  Since the Wire Act won’t work, prosecutors used the IGB.  That statute makes it a federal felony if five or more people do more than $2,000 in business a day in violation of state gambling laws.

The only ones mentioned in the indictment are New York’s misdemeanor anti-gambling statutes.  These clearly do not apply to players, which means the DoJ may not have had the right to seize players’ bank accounts.  More importantly, the New York laws have never been tested, to see if they overcome the strong presumption that a state law does not reach beyond its borders.  It also raises the issue of whether poker is a “contest of chance,” as required by Penal §225.00.

Note the repeated use of the word “fraud.”  With Internet gambling, prosecutors have tried to find ways to include fraud whenever possible.  For example, among the 22 counts in the criminal complaint filed against BetOnSports was a charge of mail fraud, for the weak claim of falsely advertising that sports betting was legal.  (The website reached the whole world, including places where sports betting is, in fact, legal.)  I believe, the DoJ’s emphasis on fraud is designed, in part, to create the impression among players that online sites cannot be trusted.

Most of the mail and bank fraud counts are actually weak.  They involve defendants lying to banks to disguise the fact that online poker was involved.  Phony companies were allegedly created and transactions labeled as sales of dog food and golf balls.  There will be factual issues whether the banks actually knew what was going on – billions of dollars is a lot of dog food.  And are we to believe no player ever mentioned online poker to his bank?

The bank fraud statute requires a scheme to either “defraud a financial institution” or to obtain any money owned or held by the bank.  The second one won’t work.  Lower courts have said the law was designed to protect the integrity of the banking system.  But, the U.S. Supreme Court ruled that part of the statute means what it says: prosecutors have to show the victim lost money.  Here, the banks were supposedly tricked into making millions of dollars.  Talk about a victimless crime.

So, the DoJ is left with having to show that banks were “defrauded.”  Again, there will be an issue of what exactly did the banks lose?  Even after the UIGEA a bank cannot be charged with a crime for unknowingly facilitating online poker.  As of June 1, 2010, there are regulations the banks have to follow.  But, almost all the events took place prior to that; and, the final regulations do not provide for fines.

Bank fraud carries a maximum sentence of 30 years and a $1,000,000 fine. Money laundering also can lead to hefty penalties.  It is another commonly used count in gambling prosecutions, because the prison sentence is based on the volume of money that was transferred, not on the gaming operations’ actual profit and loss.  A defendant faced with 50 years in prison can be persuaded to plead guilty to illegal gambling charges that would otherwise be dismissed.

The indictment sets forth facts that would seem to call for a count of bribery, if true.  Some of the defendants paid a small Utah bank $10 million to buy 30% of the bank, so the bank would transact online poker payments that the bank was reluctant to do.  An officer and part-owner allegedly asked for, and received, $20,000.  The indictment is careful to call this payoff a “bonus” rather than a bribe.  The banker was charged with conspiracy and being part of the other activities constituting crimes.  This avoids the question of who exactly was the victim, since it was the banker who solicited the payment.  It also gets around the problem of whether a briber and bribee can also be charged with being coconspirators.

The DoJ has done what it could to make this indictment as frightening as possible.  But we will probably never know just how strong the government’s case actually is.  The payment processing defendants who are now in the U.S. will fight for a while, but will eventually have to agree to plea bargains.

The others, especially the big fish, also won’t stand trial.  They would like to settle, even paying hundreds of millions of dollars and admitting they violated the law, but only if they won’t serve long prison sentences and risk losing their licenses in other countries.  The operators have one major bargaining chip: If the DoJ won’t make a deal they can live with, they will simply stay away from countries where they might be extradited.