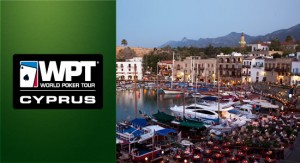 The Party Poker WPT Cyprus Satellite takes place every Sunday at 15:20 ET for a direct buy-in of $325 + $25 and awards 1 WPT Cyprus prize package guaranteed, and 1 for every 20 players registered for the tournament.

Players can win their seats in this event through a Satellite Qualifier, taking place twice daily, at 15:20 and 20:45 ET, and again as a Turbo event on Sundays, for a direct buy-in of $35 + $3, and awards a seat in the WPT Cyprus Satellite for every $350 in the prize pool.

And finally, players can win seats in the $1 daily WPT Cyprus Sub Qualifier Speed Rebuy tournament by finishing in the top 25 of a daily Party Poker WPT Cyprus Freeroll tournament.