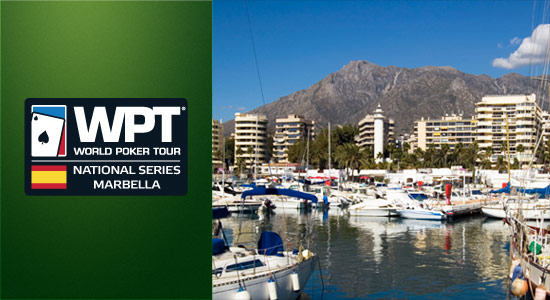 The next Party Poker WPT satellite series has begun, and its for the World Poker Tour National Series Marbella main event, which takes place between April 20 and 24, 2012 on the exotic Costa del Sol of Spain at the Marbella Casino, Marbella, Spain.

Each Party Poker prize package into the WPT Marbella is valued at $4,000 and includes the $2,250 cost to buy in to the tournament plus $1k for expense money and a 4-night stay with hospitality while you’re there. Players are responsible for their own travel to and from the event and for acquiring all the necessary travel documentation.

Players can avoid the $225 direct buy-in into the WPT Marbella Satellite through a satellite qualifier. These run every day at the site at 1:30 pm ET and additionally as a Turbo tournament on Sundays at 11:15 am ET for a direct buy-in of $25. One $225 seat in the next WPT Marbella satellite will be awarded for every $225 collected in buy-ins.

There are also two ways that players can avoid the $25 satellite qualifier buy-in by winning a seat through one of two different sub qualifier speed events, one with a $3 buy-in and one with a $1 buy-in and rebuy. There’s even a WPT Marbella Freeroll qualifier you can enter to win a seat in the event for no cost at all.