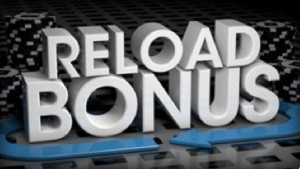 The Carbon Poker reload bonus will then be released to eligible players in increments of $5 at a time after the player meets the redemption requirements of earning 150 VIP Points per dollar of the bonus. That means a player must earn 750 VIP Points in order to have each $5 increments release. Once a bonus or portion of the bonus is released, it is then withdrawable as cash from the player’s account. However, if there is any portion of the bonus still left to be redeemed when an already released portion of the bonus is withdrawn as cash, the unredeemed remainder of that active bonus would then be forfeited. Any unredeemed portions of the active bonus will also be forfeited in 90 days from being claimed.

New players to Carbon Poker, meanwhile, can get a 200% initial deposit bonus of up to $5,000. The bonus code for this initial deposit bonus is CARBONPK and the minimum eligible deposit is $10. VIP Points earned playing Carbon Poker’s side games like blackjack, roulette, Caribean Stud, video poker, backgammon, and euchre do not count toward meeting the redemption requirements for this bonus.

Whichever bonus you claim, all players new and old making a deposit into their Carbon Poker account in any given month are also rewarded with a seat in the $10,000 Depositors Freeroll taking place on the second Sunday of the subsequent month at 13:00 lobby time. 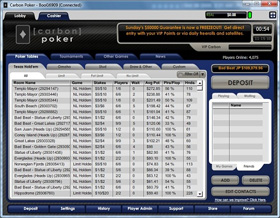 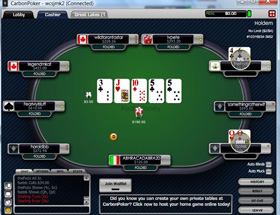